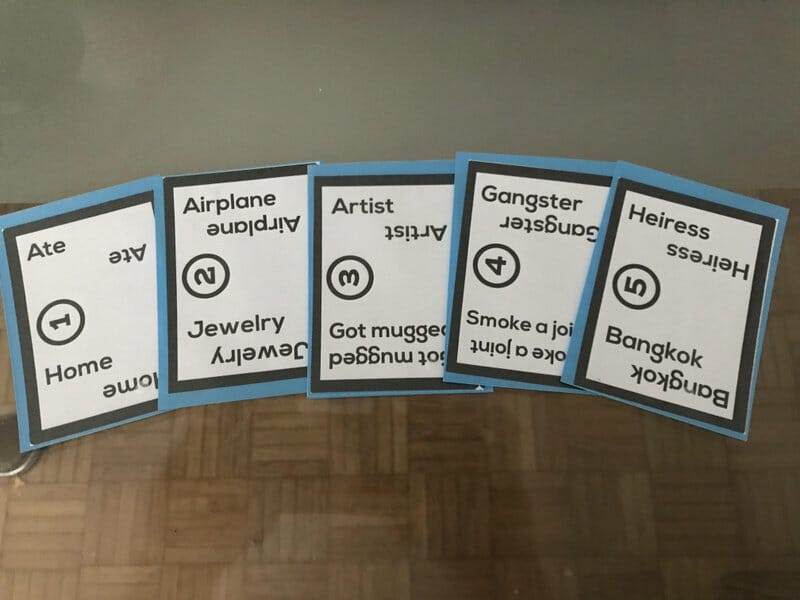 Now that you’ve assembled a toolbox of components / bits, it’s time to turn what’s in your head into a real-world prototype. We’ll save the conceptual stuff for another post, but let’s assume you have the idea firmly pictured in your head.

The most common path for prototyping tends to look like this:

Yes, this might feel like going through the motions to some people. Do it anyway. The goal of this stage is to bring what’s in your head into the world of real, tangible cards / dice / minis / whatever. At this stage, a couple of important numbers / words are all that’s needed – just the bare minimum to make it playable. Layout the card and sketch it out, if that’s a talent you have, or just assign each space to cover a certain thing. This will change, so don’t get too attached to any one look.

(The game you’re seeing above, by the way, is a new-look-as-of-this-publication look at Crazy Travel Stories – a storytelling game with story-starting cards and word cards where everyone’s a judge. The same word is written twice in each direction so that it’ll be easily read by players around the table, and the bottom half is covered by the next card in the story.)

You’ve probably heard it’s easier to fix something while in the earlier stages of development? Imagine finding that game-breaking issue long after you’ve playtested the game, gotten the art done…

Yeah. Pain in the rear.

Expect the game to break multiple times in multiple ways. Just assume it will happen, even though you don’t know how quite yet.. You might discover there aren’t enough resources in the game to accomplish the goals / missions, or some cards are seriously over / under powered. You’ll find rules that are too restrictive or too permissive, or a playtester finds a loophole of some kind…

A sidebar about rules, your honor?

While you’re thinking about rules, you might be asking ‘what’s the best way to organize the rules?’ Break out the rulebooks of the game you know and love (or maybe just the ones you have on your shelf). There’s usually a little blurb about the world of the game, who you are in that world, and what you’re trying to accomplish. There’s usually a list of components so people can check if a piece or two is missing. There might be some sample turns, or examples of how game play works. This part varies a lot, of course.

At the end of the day, your rules need to accomplish three things while playtesting:

‘How long should my rules be?’ is another common question — as long as they need to be. Open up a new Google Doc and get typing. At the early stages, a page or two is enough to get you going. Every time someone asks a question that isn’t clearly answered in the rules, make a note of it, put a big star right next to it, whatever you have to do to remind yourself to add it to the rules. Sometimes it’s how a rule is worded that causes the confusion — your rulebook’s goal is 100% clarity by 100% of players. If a picture would help, add it.

Refine and balance until you can complete the game without anything breaking.

From a mechanical standpoint, at least. A few other questions that have to be asked:

Which program to use is a really common question, and there’s plenty of answers. Go with what you already have / know. If you have Photoshop / Indesign and know how to use those, by all means use them. component.studio is another excellent choice for designing online brought to life by The Game Crafter, albeit one with a monthly subscription fee. I personally have used PowerPoint for almost all of my designs thus far — it doesn’t do everything, but it makes text boxes, adds images, and exports clean PDF’s to print without too many issues. I’ve also heard good things about Publisher (another element of the Office suite), which plays nice with Excel / Mail Merge, but isn’t necessarily a part of everyone’s Office setup.

Some things to keep in mind when creating your first prototypes:

Print it off, sleeve it, and gather the components to show people

Not every game makes it to this stage, and that’s OK. Let the ideas percolate for awhile, or shelve it and pick it up again later.

If your game has made it this far, expect things to change after the first playtest, more after the second playtest, the third playtest, and so on. It takes time for a game to ‘stabilize’. (I’d make a food joke here, but I honestly don’t bake / cook that much. Like… Jello, maybe?). With more playtests comes a general sense of what’s working, what’s not, which strategies are more likely to win (or fail), and so on.

How do you make prototypes? What’s your own process look like?