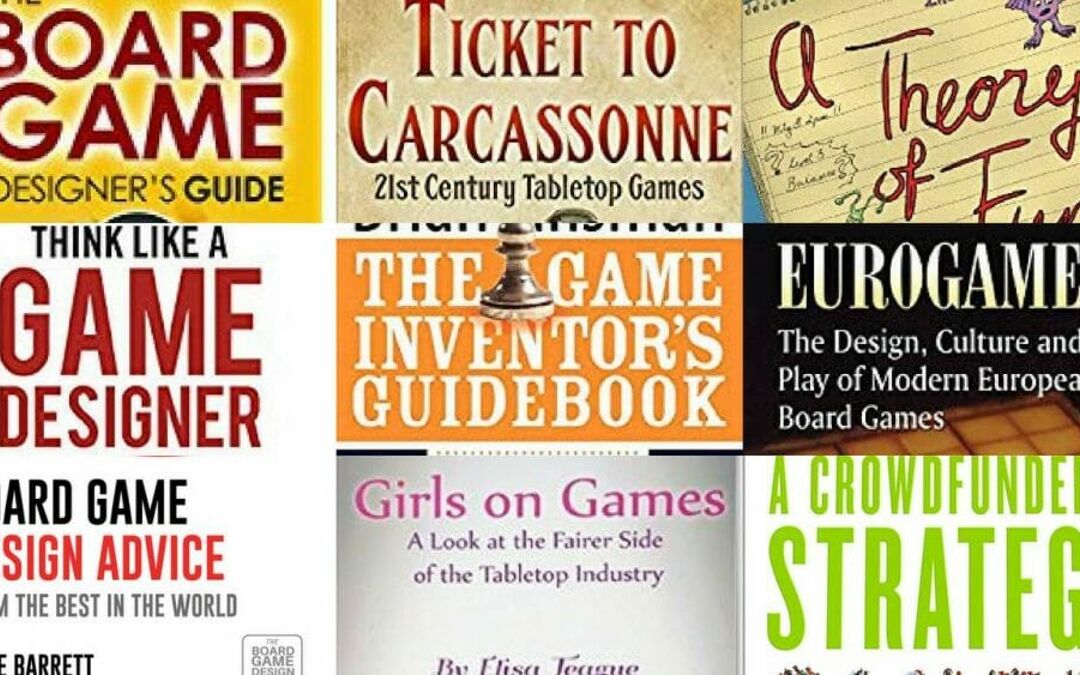 There’s no shortage of books written about game design or how to make board games — in fact, every time I look for something new to read, there’s usually a new one I hadn’t heard of before. This isn’t not an exhaustive list, but aims to curate some of the best books out there (and of course, the comments are open to others). Without further ado…

This tome isn’t so much written by the Board Game Design Lab podcast’s host as it is edited by him. Essentially Gabe reached out to dozens of successful game designers and asked them all the same set of questions. This book is the collection of their answers. With time you’re going to know several patterns within their answers — you’ll get that when you look at so many different paths to success, but there are some pretty critical things to do right.

Who is it for? The questions themselves are geared towards designers who have already designed and playtested at least one game, or who are in the middle of the design / playtesting cycle. If you’re newer to game design, this might get you into some good habits early on, or it might feel a little premature.

Offering an ‘easy 4 step process to create amazing games; Joe’s book comes with a foreward by Jamey Stegmaier (another name whose blog is required reading for game designers), and is a complete step-by-step guide. It’s complete with a glossary of terms used, a partial list of publishers, and a healthy dose of reality seen all the way through the book.

Who is it for? New designers will get the most out of it, but experienced designers may also glean some insights they haven’t read elsewhere.

Jamey Stegmaier probably needs no introduction, but just in case: he’s the founding partner behind Stonemeier Games, which is behind Viticulture, Scythe, and Charterstone, and his games have collectively raised seven figures in funding. His resources for game designers — especially those looking to crowdfund their game — should be required reading. That task is made a lot easier by this book, since a lot of the blog’s material is also in the book. “It doesn’t read as a cohesive whole. It doesn’t tell a story,” Jamey correctly noted about the blog in the foreword.

‘Putting your backers first’ is perhaps the most persistent wisdom to be found, and when decisions are made based on what’s best for them, many other decisions are a lot easier to make. I also really appreciate Jamey’s attention to detail, especially with things like checklists, when to do certain things, and technical details about game manufacturing too often fraught with pitfalls.

My only quibble here is that the book dates from 2015, and a fast-moving industry like crowdfunding might mean the book’s advice may be supplanted by current wisdom. That the book contains principles, not tactics, means the book is pretty future-proofed.

Who is it for? Any game designer planning to crowdfund their game — ideally, the earlier you’re at in this process.

Subtitled ‘A Look at the Fairer Side of the Tabletop Industry’, the best way to start this short preview is like this:

You need to buy this book.

With the exception of the foreword, every piece in this anthology is written by a woman. They write — frankly and openly — about their struggles in a male-dominated, post-Gamergate industry. Kickstarted in 2014 and funding almost eight times its goal, it’s as clear an eye-opener as you’re going to find, short of a face-to-face conversation with any of the writers. Whether you’re ready to make a more welcoming gaming environment, pitch your game, or considering the differences between styles of play (or which types of games are more appealing to women), the entire book is a great read. I may not need to know how to be a female GM (Game Master), but Satine Phoenix spells it out — and like most good reads, it informs my worldview and game design. At 125 pages, it’s also one of the breezier reads in the list.

Who should read this: humans currently breathing oxygen.

Presented as a ‘step-by-step guide to unlocking your creative potential’, five major parts focus primarily on design and building great games, with the final part focused on making money. In case the name is unfamiliar, Justin is the guy behind Ascension and is a Magic the Gathering Pro Tour champion. “There is a simple, learnable process for becoming a great game designer,” he argues in the introduction. The book is well-laid out and well-organized, and doesn’t rely on fancy graphics or words to make his points. While a fair portion of the book is made up of blog posts on his website, there’s an excellent resource in the back of the book worth the book’s price.

Who is it for? New game designers or people thinking about designing a game. More experienced designers might find words of wisdom as well.

If you didn’t immediately grok the title of the book amalgamated Ticket to Ride and Carcassonne, this book is for you. It rambles a bit in places, but helps to give the reader an overview of board gaming’s recent history. The book focuses on the games themselves, along with their strategies to play. It’s perhaps a way of appreciating the games if you haven’t yet played them for yourself, much like watching a playthrough is a decent substitution for playing it yourself. Personally, it’s a reminder to put yourself in the player’s shoes — what strategies are they using, and how they aren’t necessarily the ones you might have envisioned.

Who is it for? Very new designers who need to catch up on recent board game history, or developers that haven’t played a lot of the modern classics.

Eurogames – The Design, Culture, and Play of Modern European Board Games – Stewart Woods

With its more academic language and background, Eurogames is not as easy a read as some of the other books here. It aims at offering a formal look at the world of games. The copyright date is 2012, and references a Board Game Geek survey done in 2007, so it’s not exactly an up-to-date sort of thing. As mentioned before, it doesn’t need to be, and it’s recommended here as a thorough background to the

Who is it for? Anyone interested in the background of the gaming world or the academic language of games — or really, anyone needing a book to fall asleep to (sorry, Stewart).

The version of the book I’m talking about is the 10th anniversary edition, and it’s written by a veteran of the video game industry. I can hear you now — what are you trying to pull here, Chris? — and I feel the need to remind you that game design for video games is in many ways similar to board games. It’s focus is not on meeples and dice, but starts with that classic game, tic-tac-toe, and spends an entire chapter on “How the Brain Works”.

In other words, this isn’t a book about how to make a game. It’s so much more important than that.

You will feel like some concepts aren’t as important, or that some elements of the book have nothing to do with your brilliant idea. Great games — and the designers that created them — take into account much more than the cards and dice and meeples, and this book gets you thinking about them.

Who is it for? Any board game designer, from budding to veteran.

One part anthology and one part guide, the book focuses on the making and pitching of mass-market games along with the companies that sell them. It’s from 2008 and doesn’t mention the concept of crowdfunding, and as such you might dismiss it as being almost a relic of a different time. I recommend it here as some lighter reading that starts off by telling the stories of games you’ve heard of, which nicely traditions into some interviews with people you’ve heard of (Reiner Knizia) and some 10,000-meter-level-thoughts into the processes to getting published.

Who is it for? Newer designers interested in a casual history and info on pitching.

When a book is formatted and sold as a textbook, it usually means you’re being set up for a pretty dry time. I’m happy (relieved, actually) to say this is different. Yes, it’s structured as an academic textbook, which means the exercises in the back may become part of your homework if you’re taking this academic class somewhere.

The subtitle here is ‘Non-Digital Exercises for Video Game Designers’, so if board games are your first choice of games to make, you’re not quite the target audience. That said, I choose to use whatever materials and resources that help me get where I’m going, and this is another excellent overview of most things game design. The highlights are the challenges themselves at the end of each chapter — designed to engage you on the stuff you’ve been learning about, they’re creative and well-thought-out.

Who is it for? Newer game designers seeking a more structured approach to learning, and game designers of all levels looking for some academically sound exercises.

The Kobold Guide to Board Game Design – Mike Selinker

Call this one an anthology by over a dozen accomplished designers, or just a glimpse into some of the best minds of gaming, if you like. Each piece is easily read in a matter of minutes, and offers a different insight into some aspect of game design. One snippet talks about how to developing a game (which is different from designing a game), a hilarious entry on ‘Amazing Errors in Prototyping’ by Steve Jackson gives you a chance to laugh at another’s anonymous misfortune,

Who is it for? Designers who are gearing up to pitch publishers, or really any designer looking to make a game that a publisher will eventually pick up.

What have you read about game design recently?