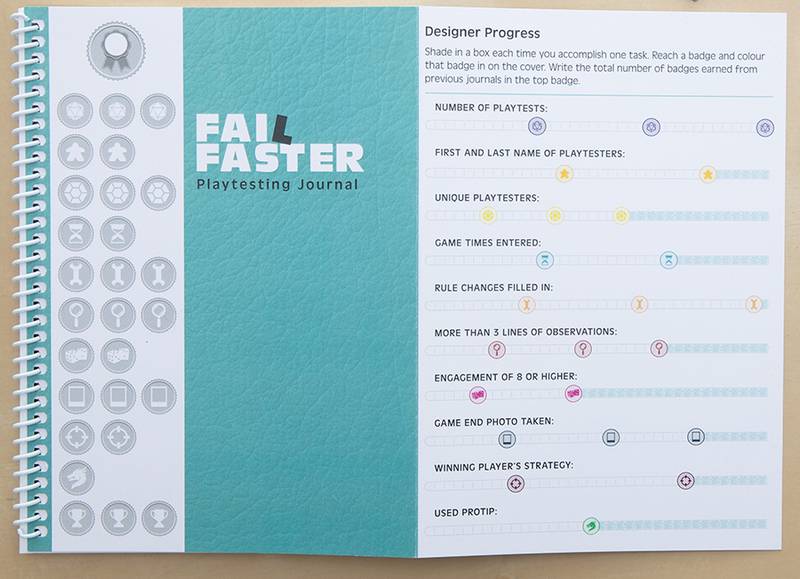 Part of good playtesting means taking notes, and for better or worse that means a paper notebook. (No way my laptop leaves my house unless it has to, and typing notes into a tablet or smartphone is too slow.) For most of the last two years, I’ve used small (A5-ish) notebooks that are always stuffed in the bag along with the games…

Called the ‘Fail Faster Playtesting Journal’, it’s put together by Jay Cormier, the mind behind Belfort, Junk Art, and a number of other games. It’s a Kickstarter project that went live when this post did. What you’re seeing above is the inner cover, folded out to show several progress trackers. It wouldn’t be a notebook about game designs, kept by game designers, if it wasn’t gamified a little bit…

Above: A preview photo of a two-page spread, partially filled out above, and below: a look at the blank two-page spread (just imagine the spiral bounding down the middle)

There’s a bunch going on here, but the overarching goal is to prescribe a format to take detailed, useful notes while playtesting:

Everything here serves multiple purposes — getting playtesters names help you credit them later, and can track whether one player always wins. Asking for specific details means you’ll be writing down specific things, which goes directly towards knowing what to change for the next iteration.

The notion here is sound: new playtesters / designers need a structure to follow, and creating your own structure runs the risk of forgetting critical details.

Is this for you?

If you’re a new game designer and seeking to add some real-world wisdom to your life, yes, this is definitely for you. The structure here is pretty carefully set up to appeal to the widest possible audience of game designers, and you don’t need to use every little feature to get value out of the journal.

If you’re a more experienced game designer, you may well already have a process / system of note-taking that works for you. Whatever they are, they can always be improved, and this journal might be the structure you need to improve it.

The Kickstarter runs from March 5th to 28th. Learn more at LINK or on social media: