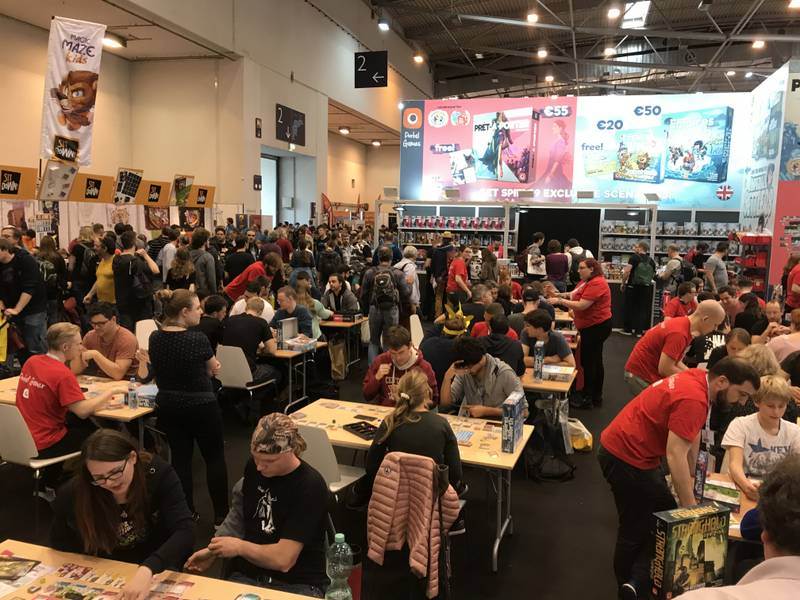 I’m back from Essen… and there’s a lot to unpack.

Whether you also attended Essen or are just curious to hear how it all went down, read on for some protips and thoughts.

About the fair itself….

Comfortable shoes are an absolute necessity.

I made this mistake last year by thinking I had broken in a brand-new pair of shoes enough for all the walking I was about to do. I was wrong on that note.

This year, my shoes were well-broken-in and were a wide sort of size to give my feet plenty of room. I also wore some thick, athletic socks and re-laced my shoes to ensure they fit my feet a bit better. The result: no blisters, no pain. Yeah, they were tired, but that’ll happen when you do a lot of walking!

The maps above the hall entrances are great.

It’s easy to get turned around in one of the halls, no matter how many times you’ve been to Essen. They’re a great way to remember which halls are connected to to which other halls.

Hall 7 was a staging area for waiting — and it was excellent.

This was new for 2019, and it was brilliant. No more standing outside waiting to enter in the cold, and a much better flow of traffic from the U-train to the hall. You now have two different metro stations and two different entrances to choose, depending which hall you wanted to start out in.

More food vendors were here — and scattered around — than ever before.

The Galleria (a corridor connecting several of the halls) has the highest visibility of food areas, but there were other areas to take in. Look for the food trucks in an area connecting halls 4 and 5 in what might easily perceived as an outlying area. It’s surprisingly easy to overlook these food trucks, but in 2019 there were several international options.

There are also vendors located outside in one of the parking / loading lots, but there was always a long line and I never gave them a chance.

More countries were represented than ever before.

Singapore. Indonesia. Iran. Plenty of folks from China representing manufacturers, but also some gamers and publishers were around as well. People and/or companies from over 50 countries were present, speaking dozens of different languages.

If staying outside of Essen, the 7 day ticket is your best option.

For most non-Germans, and even for well-traveled folks, the tickets for public transportation around the area are confusing. You can always buy tickets one at a time as you need them, but this ends up costing a lot more than it should.

The 7 day ticket in question is essentially unlimited travel on any form of transportation within a given zone for that time period. The concept of these zones are rather confusing, however, so let’s break it down.

The price for these tickets is based on what zone you need: A, B, C, or D. Think of where you are as the bullseye on a dartboard or a large circle, with zones A, B, C, D as ever-larger circles where you’re allowed to go on that ticket. Buying a zone B ticket lets you go anywhere in zones A and B, for example. It’s kind of hard to figure out which zone you’re going to, but it is broadly based on how far you’re traveling. The exact letter doesn’t matter, but it will likely be on your ticket.

What zone do I need? While you might be able to look this up on some bus stops (which use that bus stop as the bullseye), but the easiest way is to login to bahn.com, the website for German trains. Look up where you’re flying into (probably the Dusseldorf airport) or where you’re staying, then use Essen Hbf (short for Hauptbahnhof, or train station) as your destination, like this:

Find one of the trains that says ‘VRR-Fare’ in the right column, then click the red button. It doesn’t need to be the actual train you’d ride:

Scroll down to find the 7-Tage ticket. Confirm the days you want the ticket to be for. From here, the rest of the purchase process should be familiar.

Don’t worry about that region code, by that way — that’s essentially the bullseye from which the ticket starts.

Trends and other thoughts

What to do differently next year?

This ended up being a bit high, and I ended up sending more print-and-play copies than expected while bringing some prototypes home. It’s challenging to know exactly how many you’ll need, and I’d rather have more than not enough (especially because trying to print more can be challenging and expensive, assuming you can find a place open earlier / later than Essen!).

Limit meetings to one per hour. I started off intending to give myself about 30 minutes per meeting, then about 30 minutes to navigate the halls to get to the next appointment. Some appointments were shorter than 30 minutes, and navigating the halls is easier once you’ve done it a few times… but still, it would have been nice to have a bit more free time without having to rush around the place.

Print more business cards! I almost ran out. Gave out some stickers instead, which were also great.

Overall, I had a blast.

A lot of preparation went into making Essen amazing, but it was time well spent.