Game design 101: What if someone steals my idea? 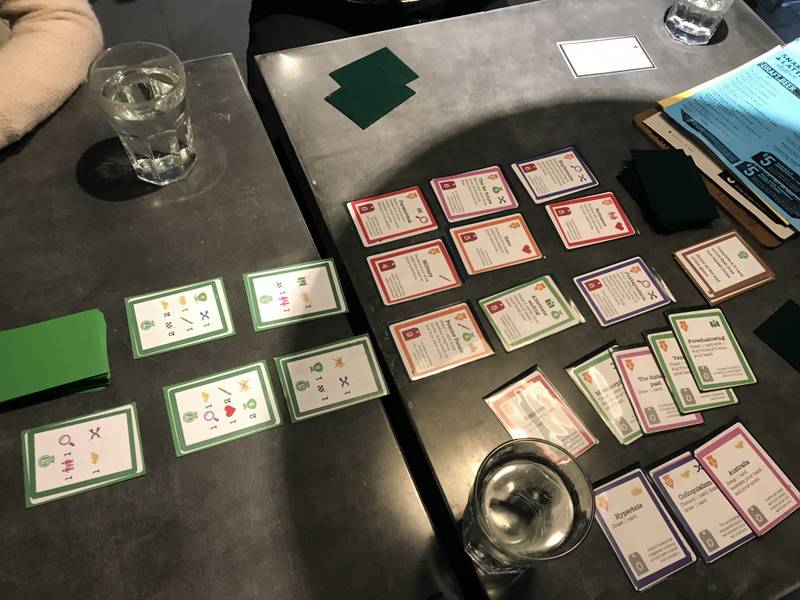 The fear is the same.

The reality is that an idea by itself is worthless — it’s the execution of that idea that matters.

Most of my game ideas are out publicly on my site. Game designers discuss their ideas openly with each other in the Facebook groups. You have to show your game at playtesting nights openly to get feedback to improve it.

Your idea stands on the shoulders of other games and ideas that have come before you. You’ve learned from them, and hope to add your own contributions to that corpus of awesome. Your vision, your experience, and your goals guide that idea to its completion. Two people can have similar ideas, but because of their vision and experience, will go two very different ways with their ideas.

Yes, there’s a lot of ‘what if…?’ questions that can be asked.

Yes, there is always a chance someone could see your idea, hear about you talk about it online, then tweak it and rush it to market before your game is ready. In 3 years of active participation on Facebook groups and the rest of the industry, I have never heard a credible story of this happening.

There was a Kickstarter campaign in 2018 that plagiarized the rules for their game from other games — when people found out, they cancelled their pledge, and the publisher of the game that was plagiarized ultimately got the game cancelled.

There are reports of some very successful games being counterfeited and sold on Amazon… and there are also new technologies coming out to fight that. Until your game gets to be very successful, that’s not a concern to worry about.

Yes, someone might see the theme of, say, an alternate history of the Civil War, and use that in their game… but then they implement it in a very different way. People think differently, even when thinking on the same thing. As one proof of that, join the Board Game Design Lab Community on Facebook, and look up the weekly thread by Ben Moy.  In it, he asks “What game idea can you come up with about “[word/phrase]?”. Designers offer up ideas, and they’re all different. Same idea, different twists.

In short, other people don’t need your ideas. They have plenty of their own — I have notebooks and Google Docs full of them.

Want some more ideas? Fellow game designer Daniel Solis wrote about stealing ideas back in 2013. In that post, he links to five other pages worth of his ideas.

Want even more ideas? Check out Board Game Geek’s Works in Progress forum. Designers from around the world freely share their concepts, sometimes to participate in contests, or other times to get feedback from a world of passionate gamers.

A lot of these fears and questions come from folks familiar with horror stories in other creative industries (which may also be apocryphal, anecdotal, or exaggerated). These answers can come across as innocent, even naive.

Part of this mindset comes from the legal reality surrounding board games. Legally speaking, the ideas presented in a games are hard to protect. You can copyright the rules of a game (to protect from plagiarism) and you can trademark a brand name. You can’t, however, stop someone else from using the mechanics or theme in your game. Imagine a world where only one game was allowed to use something like ‘draw two cards and keep one’ or a theme about building a castle.

Their patent was on the game as a whole, not the mechanic, and other companies could still use the tapping mechanic. They  just couldn’t use the distinctive (and trademarked) tapping icon… So other companies gave it a different name — exhausting, using, sacrificing, whatever. They could still rotate a card 90 degrees to show it was used in some way.

Beyond that, the world of board games is still a small community. Do you want to get a reputation as the person making rip-offs? The community is quite good at sniffing out fakes, BS, and overly derivative work.

Given the choice between a game that’s similar to something else in their collection and something new and innovative, most gamers — including the vocal minority online — choose the latter. That’s one reason why so many publishers emphasize they’re looking for something innovative. If they can’t sell it, they don’t want to make it.

To be sure, there are very very few original ideas out there. Every few years, however, something truly innovative does come up and make the rounds… but most good games these days tend to combine familiar ideas / concepts in unfamiliar ways.

So where am I with my idea?

Because there’s so little protection for ideas, ideas aren’t worth much by themselves. There’s a lot of steps that go into turning an idea into a first prototype, then playtesting, then revising, and so on.

I’d like you to picture a marathon for a moment. You’ve got your bib / number, you’re dressed for the occasion… If you have an idea for a game, you have just arrived by public transportation to the start of the event, and are walking to the starting line.

If all you have is an idea, you haven’t even started the race yet.

That’s not meant to sound bad, by any means — just early. People almost never see the number of versions and amount of changes a game goes through, but games can go through dozens of iterations and quite a few prototypes before they’ve ever shown to a publisher.

What can I do to protect my idea?

Develop your idea into a game — something that is at least partially protected.

Until then? Ironically, the best way to protect your idea might be to put it out in public. Stay with me on this — the best evidence of your idea existing earlier than something that comes along later is the date on which it was expressed. This might be on a Facebook post, a Tweet, a post on Board Game Geek, or somewhere else. If someone comes out with something very similar, you can then point to your earlier posting and start raising questions.

Another option is to take into your confidence enough playtesters and gamers that can playtest the game and get it ready for publication… except then, you still have to pitch it to publishers or begin building some buzz for a Kickstarter. This means finding them, giving them something to encourage their silence, and using their feedback (and only their feedback, because you’re not showing the game to others!)…

Should I get them to sign an NDA? Non-Disclosure Agreements are common in some industries. They’re not common in the world of board games, though they are used by some larger publishers that are generally following corporate strictures. You don’t need one, shouldn’t sign one, and shouldn’t ask others to sign one. Even if you had someone sign an NDA, there’s the matter of enforcement, judgment, and all the time spent doing that.

The biggest issue here is that feedback can come from anywhere, anyone, and at any time. By limiting the sources it can come from, you limit the opportunities to hear it.

Aren’t you taking a risk by showing your game to publishers? Simply put, no. Think of the risk they’d take if they took an idea from someone. The average royalties they pay out to the designer are a small fraction of their revenue — it’s just not worth it financially.

The worst option by far is to keep it all to yourself. No one is an island, and everyone has blind spots they’ll too easily overlook. You’d spend all the time and effort to make a game, only to discover a single question potentially throws everything for a loop.

Do the work. Transform your idea into a playable, playtestable, publishable game. You need not share every last little piece of information to the world in the process, but you never know where good ideas might come from. Use every opportunity to playtest publicly. It’s a mindset change for some, but it’s one worth making.