Making board games virtually: a review of 5 tools 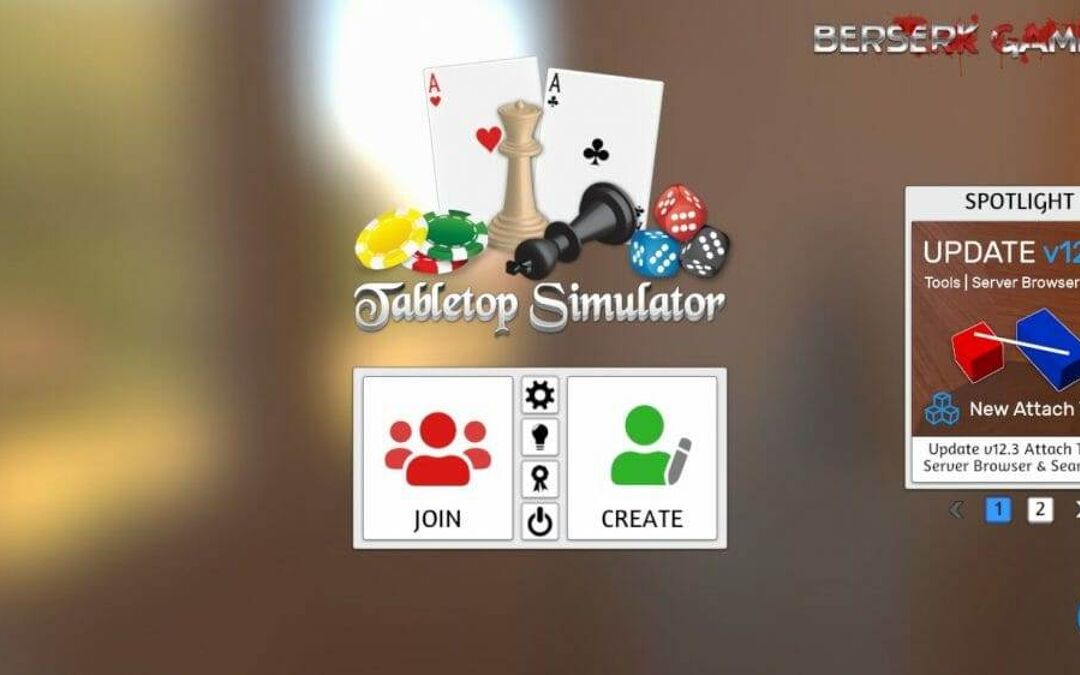 Even before the coronavirus changed the world forever, game designers were creating versions of their tabletop games that can be playtested online. Sometimes it was to connect with playtesters far away, or to play a game with a loved one that can’t be there with you.

These days, a lot of playtesting is being done online. While the classic ‘print-and-play’ version of a game remains a great way to give a tactile feel of things, it usually means messing around with cameras, lights, and other equipment… or asking your playtesters to print, cut, and sleeve a game they may only play once. Making your game playable online in one of these ‘sandbox’ tools means you don’t need to do any of that.

Each of these tools has pros and cons, which I’ve aimed to highlight here. Which one’s the best for you? Keep reading.

Arguably the granddaddy of them all, Tabletop Simulator aims to simulate just about every aspect of a tabletop game. If you’re invited to play a tabletop game in a virtual setting, there’s a pretty good chance it’s a ‘mod’ in Tabletop Simulator. There are plenty of paid DLC games already on the program (and others of questionable copyright status), but what’s I’m noting here is how the platform is used to facilitate game design and playtesting.

Initially released in 2015 after a successful Kickstarter, it’s the only program / app on this list with a cost — $20 on Steam, though it does go on sale sometimes. Like most ‘sandbox’ systems, you can open to hosting creations of your own design, and ultimately being manipulated in plenty of ways by the players while playing. That there’s a button marked ‘Flip’ with a table that… well… flips the table. Pretty cool. (It’s also easy enough to disable, for obvious reasons.)

The frustrating aspects have to do with how heavyweight this program is to run. My computer is a mid-range model and about three years old, and it sputters whenever this and just about anything else is running. If I want to run Discord or any sort of voice chat, I’ve taken to using my iPad to run the voice chat while letting my computer handle Tabletop Simulator…

Like other entries in this post, there’s very little available to prevent someone from messing around with other people’s cards, tiles, etc. Just as you wouldn’t hit a card out of someone else’s hand or flick someone else’s chips off the table in real life, you shouldn’t be doing it here.

It’s where I’ll be going to playtest other people’s games, and I’ll probably eventually make some games on it myself. For now, there are several other options worth mentioning.

If Tabletop Simulator is Coca-Cola, Tabletopia is Pepsi — the other dominant brand in an industry. Available since December 2016 on Steam, these two programs are usually the ones named as ways to play board games virtually. Like Tabletop Simulator above, it’s a sandbox tool with plenty of things to add and create your own game.

To be perfectly honest, I have very little first-hand experience with Tabletopia. Hopefully others will chime in in the comments, but I can tell you that you’ll be building your game inside a web browser, not their program. I haven’t had a good reason to look into it — until recently, I didn’t have any plans to create electronic versions of my games…

Although it’s been around for years, I’ve only just discovered playingcards.io about a week ago. The offering here is a dead-simple, browser-based platform to build and play games. Create a game in a table,then share that URL with anyone you want to play with. Based on their Twitter feed, it looks like there have been quite a few new features added in the last month or two.

The speed and ease of joining a game makes this my new favorite. With that said, it’s far from the fully-featured suite of tools seen above. There are few bells and whistles needed for bigger or heavier games here. If your game can be played with cards, dice, poker chips, and colored pawns, you can make it work here (a spinner takes the place of the dice, though considering the speed of development, there may well be dice in the future).

A CSV import tool enables the creation of custom decks (a quick protip here: when you upload to Imgur and get the URL, that link does not go directly to the image, which is what this and other programs would need. The solution is to add ‘.jpg’ or ‘.png’ to the end of that URL.

One glaring issue I hope gets fixed fast: the ability to edit the game is available to anyone that has the link, and that can’t be disabled by the host. You’ll want to tell playtesters not to mess with that, and otherwise only share the link with people you trust, not publicly. Another issue: if a game goes unplayed / unused for a couple of weeks, the room is deleted.

There’s plenty to come with it (I hope), and although there are a few quirks, I’m currently using it to playtest one of my games.

Parts of Screentop.gg still look minimalist and still-in-beta, and the back-end creation tools are still a little rough around the edges. This is another tool still in active developments, and the creator (along with other helpful folks) is on Discord to offer help.

What’s available here as of publication is more than playingcards.io but less than Tabletop Simulator or Tabletopia. You have plenty of playing cards (called tiles), dice, counters (an easy way to keep score) and ‘containers’ (used to create decks or hands of cards). There aren’t any tokens or chips or cubes per se, but you can create a small tile to show a cube, or just use a die.

What’s not (yet) available are some tools that make bulk editing possible. You might find it a bit tedious to create or edit stuff one piece at a time. It also took me the better part of an afternoon to wrap my head around putting things together for a fairly small game. In terms of a workflow, upload your assets, split them into components and variants, then use containers to form decks of cards. Use the surfaces to set up the board / table as you like it, and know whatever happens to it during gameplay, other players can’t change things easily.

Mentioned here in the interest of completeness, Vassal is an open-source boardgame engine. Originally released in 2003 and once known as ‘VASL: Virtual Advanced Squad Leader’, it’s remained open-source and in active development since then. While the engine has been used to adapt hundreds of games, the list tends to skew towards heavier tabletop games, RPG’s, and wargames. The site and modules might look a little dated, but that means it’ll run on just about any computer that can access the internet.

All things being equal, at least one of the games I’m actively testing needs private messaging — each player needs to be able to privately message each other player. Zoom has that, but not every service does.

Whether you’re just holding cards in front of a camera, using the audio / video calls in some way, or private messaging other players, this might be the best option for some games and players. I can play a game like ‘How Much Money‘ on a video chat easier than I could in a virtual environment — I just read the cards out loud, we all ask yes or no questions and have some laughs, then get down to business. Each player then writes their answers on a piece of paper, then hold them up to the camera.

One final note: no cross-compatibility

Whatever program you end up choosing will not be compatible with other programs. This isn’t like a Word document that can be read in Google Docs. If you choose to go with another program, you’d have to recreate your game from scratch.

In other words, pick a program and stick with it.

Which one’s my favorite?

What experiences have you had with these programs? Which ones would you recommend? Which ones are worthwhile that I missed? Comments are open.