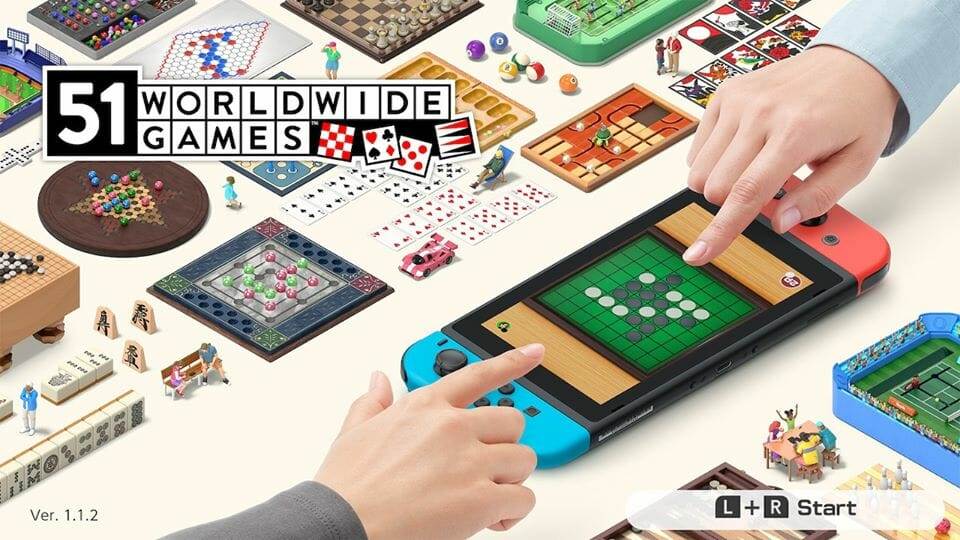 This one came out of nowhere, but has quickly become my game of the year.

Officially ‘Clubhouse Games: 51 Worldwide Classics’, one Switch game purchase gets you, well, 51 classic games that are familiar, yet potentially new. This isn’t a port, though — each game has received a lot of polish for the casual players approaching them for the first time.

A look at Carrom — use the larger red checker-like piece to thwack your colored pieces into one of the four corner’s holes. Like pool, but with checkers.

Let’s talk about one potential ‘how’d they do that?’ point. This game features ancient classics (Chess, Checkers, Ludo / Parcheesi, etc.) alongside generically-named modern classics (‘Last Card’ instead of Uno, ‘Yacht Dice’ instead of Yahtzee, ‘Four in a row’ instead of Connect Four). They’re the same mechanics, of course, just not using the elements of games that are copyrightable / trademarkable. It’s worth remembering, of course, that many of those modern classics are just older games with a veneer of originality to them.

A game night for one or two players

My wife and I have really enjoyed the local multiplayer versions of games — at least, the games that allow it. By their very nature, games with hidden information or hands are played by one player only, or one player per system. As a result, several of the card games are essentially one-player only unless you have multiple Switches.

With that said, one player has a great time against the local AI’s, or potentially the online play options (we’ve not yet tested them, but they are available). Many games have multiple levels of AI to give you a real challenge, though more luck-based games (like Yacht Dice) or score-based games (like the nine-holf golf game) just have one level’s worth of trophies.

Plenty of two-player, simultaneous play options make this an easy pick-up for couples that live together. We’ve quickly figured out who’s better at which games, but with so many to choose from, there are quite a few we’re pretty evenly matched at.

When you’re done with the games you’ve played before, how about a version of a game you’ve played / seen? Stuff like toy tennis, toy baseball, and toy curling (above) take elements from the real-world sports and recreate them in a classic, quasi-mechanical way. With toy tennis, you’re still chasing a ball around the court and thwacking it with a stringed racket. With toy baseball, you’re pitching a ball and trying to hit it. With toy curling, you take the classic ice sport and adapt it by trying to get your stone closest to the center.

This is definitively not the same as the real sport, or even other video game representations of the sport (in toy baseball, you can hit the batter or a runner without issue), but it makes for some delight in discovering what’s the same and what’s different.

A little too simple…?

This collection is aimed squarely at the casual player, not the hard-core player. Games like golf are ultra-simplified down to three clubs, a single nine-hole course, and auto-aiming at the pin, with only the variable wind creating any real challenge. Other games are engineered to be shorter than the versions you may have played before (Chinese checkers has six marbles to move and jump across the board instead of the traditional ten, for example).

Further, there’s no changing the rules to create house rules within the game, except in a few limited ways. Games like Texas Hold ‘Em and Blackjack lack some of the betting options traditionally found in those games, as one example). If you feel like creating your own house rules outside the game, then of course nothing’s stopping you from doing that.

Bowling and darts offer a great excuse to stand up and physically move around a little.

Plenty of familiar games are around, including some you haven’t heard of or played before. It’s a great time to learn how to play hanafuda (a Japanese card game once manufactured by Nintendo) or backgammon, for example.

Games are highly polished, taught well (albeit in a saccharine-sweet sort of way), and all presented in an approachable way.

The trivia and a sense of progression is cute, and I appreciate seeing the balance of characters teaching (and winning) the game.

While there aren’t a bunch of unlockables, the Mario decks of cards are something I can easily see players wanting to buy a real-world version of.

If you’ve invested in a traditional / ‘professional’ controller, you’ll find it’s only useful when playing one-player games, and only the games that don’t require motion controls. For two-player games, you’ll have to use the individual Joy-Cons.

Some of the games in the selection haven’t aged well. Games that have perfect information are usually won by the more skilled player, or the player that made fewer mistakes. Other games have a pretty serious first-player advantage, with no real way of nerfing it except to make the starting player random.

The reasons to skip it

If you’re looking for dedicated, ‘full’ versions of any single game, you’re probably better off getting one of those instead. This title isn’t about to get you to a high-level of play in any particular game, not with things as simplified as they are.

It’s a minor quibble, but I feel like there are even more games that could be added — one notable game missing is Go (the included game ‘Gomoku’ is essentially ‘five in a row’ using a Go board and stones). Perhaps this is something to expect via updates or DLC. Something like a generic version of ‘Operation’, ‘Guess Who’, or ‘Battleship’ could all fit the brand / lineup pretty well, also.

Minor quibbles aside, this is probably the video game of the year for me. Yes, I’m biased as a board game designer, and I’ll freely admit I lack the attention span patience for bigger games. I’m also playing on a Switch, so until Fall Guys comes to the platform, this is my current favorite.